Light-induced changes of magnetic ordering are important subjects for basic research and application. Most presented works have been connected with magnetic rearrangement by light-produced heating. However it seems that certain effects, when magnetic ordering could be changed by light without heating, are very interesting and important. Better understanding of these effects is one of the keys for magnetic-ordering “engineering”. Photoexcited states and photomagnetic effects (PME) connected with them have been investigated in many systems, e.g., garnets, spinels, ferric borates, spin glasses, metal, magnetite, manganite, molecule-based magnets, etc. [1-7]. Many years of study of garnets (polycrystals, bulks, and thin films) have resulted in a rather good understanding of their magnetic, optical, and electric properties. Therefore, garnets could be employed as model objects. Earlier PME investigations were limited to crystal garnets at cryogenic temperatures (T~150 K). Only recently has polarizationsensitive photoinduced domain structure rearrangement at room temperatures in epitaxial films of Co-substituted yttrium iron garnets (YIG:Co) been discovered [8]. The influence of light on magnetic ordering is mainly performed by photoinduced changes of magnetic anisotropy. This can be observed in a system where anisotropy is connected with ions whose valence state could be changed by light. YIG:Co samples are good examples of such a system because Co2+ and Co3+ ions contribute to magnetic anisotropy differently.

Experimental investigations were performed on film composed of Y2CaFe3.9Co0.1GeO12 with a thickness of 10 um. These samples were grown by liquid-phase epitaxy on a paramagnetic substrate Gd3Ga5O12 in plane (001). In the investigated film, doping with Ge4+ and Ca2+ ions was aimed at lowering the saturation magnetization and charge compensation, respectively. These ions are localized in tetrahedral and dodecahedral sublattices accordingly. Cobalt and iron ions occupy octahedral and tetrahedral crystallographic positions. Cobalt could be in charged states Co2+, Co3+, and Co4+, from which octahedral Co2+ is the most anisotropic and Co4+ is rather rare. The magnetic and optical properties of the investigated samples have been well systematically characterized performed on these or similar samples. The vibrating sample magnetometer study gave at room temperature saturation magnetization 4piMS=90 Gs and the Neel temperature TN=445 K. 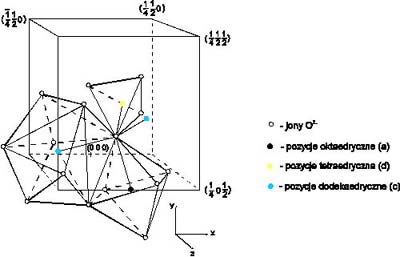 Domain structure geometry and average magnetization changes were studied using the Faraday effect in two configurations of experimental setup. In the first configuration a magnetization spatial distribution was investigated by an optical microscope with a low power halogen lamp. Domain structure images were registered by a sensitive CCD camera. A special spectral filter was used between the sample and the camera for the laser beam extinguishing to eliminate the laser distortion of domain structure image.

In the second configuration only the argon laser beam was used for both the sample excitation and the magnetization process investigation. The process was studied using a standard polarized light modulation technique.

Local photoinduced domain wall displacement was observed within the illuminated film region. Direction and amplitude of the domain wall bend depended on the light polarization state. The domain wall position could also be changed by applying an in-plane magnetic field with a magnitude larger than the certain critical value of the starting field Hs~16 Oe connected with the sample coercivity. 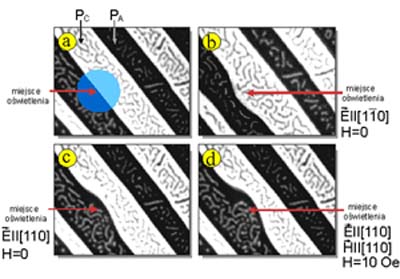 We have demonstrated the existence of the polarization sensitive photomagnetic effect (quasi-statics) in YIG:Co epitaxial films at room temperature [8].

The final domain wall displacement was measured for different orientations of light polarization with and without an external magnetic field being applied. Amplitudes of these dependencies show a four-fold symmetry with maximums along the directions [110] and [1-10]. The light power used for exciting was not sufficient to overcome sample coercivity for the light polarization plane oriented near both the [100] and [010] directions without an external field being applied. The coercivity barrier could be decreased by applying a proper in-plane field. The obtained results are described within the scope of phenomenological theory based on the supposition about the light-induced anisotropy appearance within the illuminated region [9]. 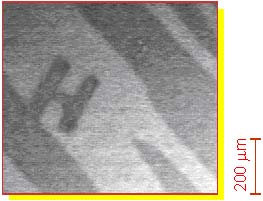 Photomagnetic effect studied seem to be interesting because of both general knowledge and possible applications. The image was obtained at T=160 K [10].